The region Piedmont is situated in the North Western part of Italy, largely surrounded by the Alps. The literal translation of Piedmont is “at the feet of the mountains”. This region is even for Italian standards rather vast; from Lago Maggiore in the north, a little more south the rice fields at the river Po in the region Vercelli/Novara down to Turin, the Alps and his ski regions to the southern provinces of Asti, Alessandria and Cuneo in the direction of the Mediterranean sea.

The varied landscape has a lot of cultural-historic places of interest and nature parks and reserves. It offers a wide range of hiking, cycling and biking routes and the possibility to go skiing.

From history books we know Piedmont also as the region from the royal kingdom Savoye which ruled for more than 1,000 years over this region and a great number of regions and countries beyond.
The city of Turin, with the knickname ‘little Paris’, was the first capital of the Kingdom of Italy. For a long time we only knew Turin as the city of Fiat factory. Only after the Olympic Winter Games of 2006 Turin became a beloved and popular city. A visit to this fascinating city is appealing. 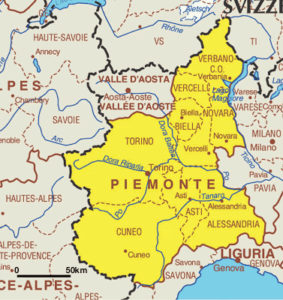 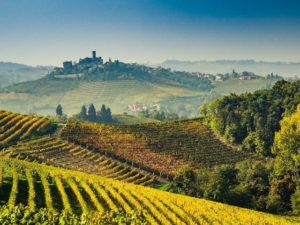 Gastronomy enthusiasts from all over the world visit this region to savor the delicious cuisine and outstanding wines.
Particularly the white truffle and Barolo / Barbaresco wines are world famous.

De ontdekking van de hemel noemde Jamie Oliver even pronounced this region “ the discovery of heaven” in his magazine of June 2013 Slow food is ontstaan (Bra).

Naturally we fully agree with him on this. All the more so because we believe this region has so much more to offer besides outstanding food and wines.

In 2014 a part of the Langhe was placed on UNESCO’s World Heritage list for its culture, landscapes, outstanding living testimony to winegrowing and winemaking traditions. Ever since the region presents itself even more proud and self-convinced to the world and potential visitors.
In October 2018 Lonely Planet pronounced the region as one of the Top10 destinations to visit in 2019.

Be inspired by Lonely Planet

With pride the region wears the compared name‘ New Tuscany’. The sloping hills, the nearly sleeping villages, ancient distinguished places with castles and towers, authentic farm life and the divine cuisine with his royal wines make The Langhe a region worthwhile visiting.
Beware… in a while everyone is talking about it.
Why still wait?

A tiny village (325 inhabitants) at the beginning of the Alte Langhe (high Langhe) and at the edge of UNESCO area Barolo.
On the surface a quite village with few inhabitants and little activity. Below the surface a lot of agricultural bustle in hazelnuts and grapes.
Also situated on the important junction (SP32) from the city of Alba via Murrazzano to the coast and the gateway to Alte Langhe.
Serravalle Langhe is also situated on the autoroute “strada romantica delle Langhe e Roero” and on the track for many hiking and biking trails.

Not to forget the famous and culinary outstanding restaurant La Coccinella is situated in Serravalle Langhe. Furthermore at the nearby Azienda Vinicola Vivalda

Next to these two gorgeous places there’s also the possibility to have lunch or dinner at Trattoria Belvedere, BarLume or buy groceries at the local supermarket La Bottega delle Langhe.
Nonetheless….a very quite village where one can savor in peace and quiet all the best the region has to offer.

Situated on the top of the hills, there is a stunning view on the Alps towards France from every position in the village. On a clear day one can even overlook the Alps surrounding Turin and more to the north the Alps towards Switzerland.
As a halo Monviso , the for this region so important mountain, attracts every ones attention when the sun sets after a beautiful day.
At a seeing distance the UNESCO area of Barolo with lovely villages such Monforte d'Alba, Serralunga d'Alba and La Morra are to be reached within 7-12 kms.